Ranbir Kapoor-starrer 'Shamshera' to release on this day!

Reports have claimed that the movie is a new take on dacoits of pre-Independence India.

Ranbir Kapoor fans have been waiting to see the actor back in action after the 2018 film 'Sanju', and the wait is finally over, as one of his highly-anticipated movies 'Shamshera' is set to release soon. 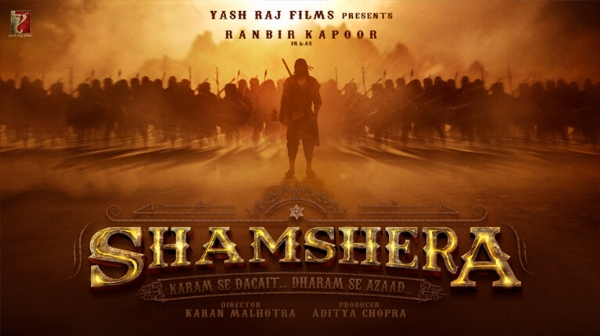 The upcoming film, which also stars Vaani Kapoor and Sanjay Dutt, is set to hit theatres on July 22, 2022. A teaser of the Yash Raj Films production was released on Friday, announcing the period drama's release date.
Vaani Kapoor on her Instagram handle, wrote, "The adventure is about to begin. Excited to be a part of this journey! Celebrate #Shamshera with #YRF50 only at a big screen near you on 22nd July. Releasing in Hindi, Tamil and Telugu. Checkout the link in bio. #RanbirKapoor @duttsanjay @karanmalhotra21 @yrf #Shamshera22ndJuly."
The teaser features the three actors sitting in the centre of a dimly-lit space surrounded by weapons. Sanjay says in Hindi, "This story is of the one who said slavery of anyone is not good, neither of others nor of the people close to us." Vaani continues, "This story is of the one who earned a dream about freedom in his father's legacy."

Viewers then get a glimpse of Ranbir, who says, "But nobody gives you freedom. You have to win it. Karam se dakait, dharam se azaad Shamshera."

While there is no official confirmation about plot details, reports have claimed that it's a new take on dacoits of pre-Independence India. The upcoming film, helmed by Karan Malhotra, is said to be a dacoit drama set in 19th century.
It will chronicle the story of a dacoit tribe fighting for their right and independence from the British. In September 2021, the look of Ranbir from 'Shamshera' was unveiled.
Ranbir Kapoor Shamshera Sanjay Dutt