New Delhi, January 26: President Ram Nath Kovind on Wednesday, received the 21-gun salute at the Rajpath in New Delhi on the occasion of 73rd Republic Day. The salute is also presented during Independence Day or when foreign heads of state visit India. 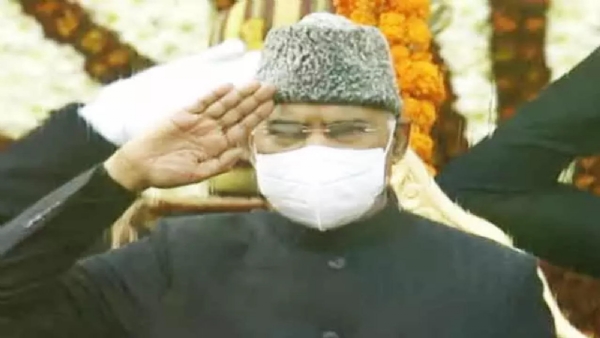 The salute is performed by firing cannons or artillery. 21 cannons are fired at an interval of 2.25 seconds to cover the 52-second long National Anthem in 3 successive rounds of 7 cannons each.
In the Republic Day Parade of this year, the 21-gun salute was presented to President Ram Nath Kovind, by the Ceremonial Battery of 871 Field Regiment under the command of Lieutenant Colonel Jitender Singh Mehta.
Before the starting of the Republic Day parade this year, President Kovind, who is also the commander-in-chief of the armed forces, posthumously awarded Ashok Chakra to Assistant Sub Inspector (ASI) Babu Ram of the Jammu and Kashmir Police.
The Republic Day parade every year showcases India's military valour, cultural diversity and other unique initiatives taken by govt. It is being held for a second consecutive time amidst the Covid-19 pandemic with participants donning a face mask as they marched on Rajpath.

The parade was led by Lieutenant General Vijay Kumar Mishra, a second-generation Army officer, who has been awarded the Ati Vishisht Seva Medal.

The parade saw participation from the Army, Navy and Air Force along with the para-military forces. Cadets of the NCC, which is India's military youth wing, also took part.