Soldiers can charge the heater plates with their own hands, using a physical rotated charger to heat the camp.

An inventor at the Atal Community Innovation Centre (ACIC) of the MIET Engineering College in Meerut, has created a smart camp for soldiers, which won’t just protect those who are posted on heights from the cold, but will also help them to check the movement of the enemy sitting at a distance of up to 50 km away from them. Developed by Shyam Chaurasia, who is an engineering student, this Chargeable Smart Army Camp has small heater plates installed in it. 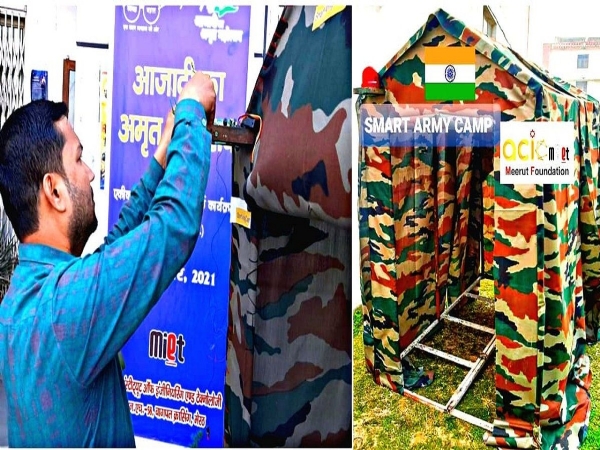 Features of the 'Smart Army Camp’ – A unique feature of this camp is that there is no need for any solar power or even electricity to heat them. Rather, the soldiers can charge these heater plates with their own hands, using a physical rotated charger. Chaurasia says that the camp also has a battery for a backup purpose. Hence, the electricity can be stored and used as needed.
Also, the sensors fitted into it, will be able to detect the movement of enemies from 50 km away and will also alert the soldiers living in the camp, thus will help them to act quickly. The smart camp has 4 human radio sensors which will help in conveying the information about the approaching enemy to the soldiers. These sensors are installed around the camp just as landmines, and are connected to the camp through radio frequency.
Enemies have attacked the Central Reserve Police Force (CRPF) camps at night, several times. There is always this possibility of more damage to life and property in such attacks. After reading about such incidents in newspapers, he got the idea to create this smart army camp.
Also Read | Meet the 24-year-old entrepreneur spreading road safety awareness in Indore
A prototype project of the camp was prepared with the help of the college and the ACIC in Meerut. Chaurasia says that funding was received from ACIC-MIET Meerut to prepare the camp. This made the project all the more better. Around Rs. 24,000 was spent on this project. He says that he can make this camp bulletproof if he could get more assistance.
MIET Vice-Chairman, Puneet Agarwal, said that there is an Idea Innovation Research Lab in the Atal Community Innovation Centre of the college. He said, "Chaurasia's project would ensure safety of our soldiers. A letter has been written to the Prime Minister and the Defence Minister for the cooperation and guidance over the project made by him."

Mahadev Pandey, the Scientific Officer of Gorakhpur, said that this innovation is a good option meant for security of the soldiers engaged in defence of the country. He says, if given a chance, it may prove to be even more effective.
Smart Army Camp Shyam Chaurasia Meerut MIET Engineering College Atal Community Innovation Centre ACIC