Afghan Women Forced to Gather at Pro-Taliban Protest at University

Afghan Women Forced to Gather at Pro-Taliban Protest at University 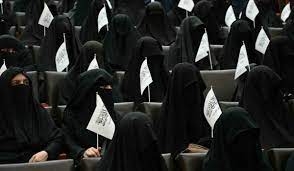 Many Afghan women were forced by Taliban to gather at the Kabul University dressed in head-to-toe black robes they distributed on the anniversary of 9/11 terrorist attacks.

Those who refused, were to be expelled, say students.

These women were to hold placards supporting Taliban and the strict interpretation of Islam, (that includes separate education for men and women).

The Taliban's interim government, has hardliners in all key posts and no women - far removed from the "inclusive" administration that was promised.

According to the new rules, women may work "in accordance with the principles of Islam", the Taliban have pronounced.

Afghan women will be allowed to attend university only as long as they study separately from men, the Taliban's new higher education minister said on Sunday. Minister Abdul Baqi Haqqani was unapologetic regarding bringing an end to mixed sex classes.

He said, “We have no problems in ending the mixed-education system. The people are Muslims and they will accept it.”

Early September, the Taliban had announced that women could still study at university if they wore an abaya robe and niqab covering most of the face, and with their classes segregated by sex (or at least separated by a curtain).

Taliban's new higher education minister said, "A woman can't be a minister, it is like you put something on her neck that she can't carry. It is not necessary for women to be in the cabinet - they should give birth. Women protesters can't represent all women in Afghanistan."