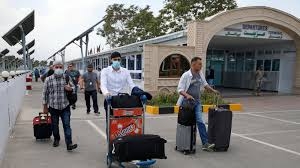 There were a lot of anxious Afghans who were trying to flee from the Taliban before the deadline which was of August 31 for US withdrawal from Kabul. These people made it to safety, and it is all thanks to the Instagram influencer - Quentin Quarantino.

Quentin Quarantino is actually the alter ego of 25-year-old Tommy Marcus, hailing from New York City. Quarantino is famous for his liberal memes and jokes about those opposing the Covid-19 vaccination. Quarantino, with the help of his followers, raised USD 7 million, all within days on GoFundMe to in order to launch rescue missions into Afghanistan to evacuate as many people as they possibly could. Many of these people said that they had been threatened by the Taliban.

On Wednesday, their mission called "Operation Flyaway" helped 51 individuals flee from Afghanistan to Uganda through ferry, on to a privately chartered plane which was financed by the campaign of GoFundMe.

Over 121,000 people donated to this campaign, after Marcus made an appeal to the 832,000 followers he has. This was one of the biggest and vastest humanitarian fundraisers in the entire history of GoFundMe. Marcus said to The Associate Press, "It's beyond humbling that they have that faith in me, that they're willing to put significant amounts of money into hands that I trust."

Saraya International, which is a global development firm along with the Rockefeller Foundation, confirmed to The Associate Press that the flight had been chartered by the emergency collaboration which was financed through the GoFundMe campaign of Marcus.

He says that this was nothing short of a miracle and that it restored his faith in humanity. They have come together from all walks of life to rescue and provide help to these people. They don’t deserve what their future holds if they have to stay back in Afghanistan now, beyond this point. A lot of those who were evacuated were women, children, and humanitarians who were staying in Afghanistan for a long time to fight for the greater good. The organisers said that they were looking to rescue 300 people who were with their families and were at impending risk of being executed by the Taliban.

The team received some scepticism from experts who wondered whether they possessed the amount of capability to pull off a mission of this kind at a time when governments, corporations and charity groups, all were rushing to get their citizens and employees out of Afghanistan on whatever aircraft they could get on.

Marcus' group said that over 350 individuals have been rescued. Almost 300 more are to leave Kabul on other chartered flights that "Operation Flyaway" remunerated to give a safe passage from the country.

This was about the Quentin Quarantino and his amazing humanitarian efforts taken to rescue those from stuck in Afghanistan in the unfortunate conditions. Campaigns like Operation Flyaway are the need of the hour, and seeing these many people donating to it definitely restores our faith in humanity. If you know of any more such individuals doing their bit for Afghanistan, tell us in the comments below. Do visit the space for more such inspiring stories!