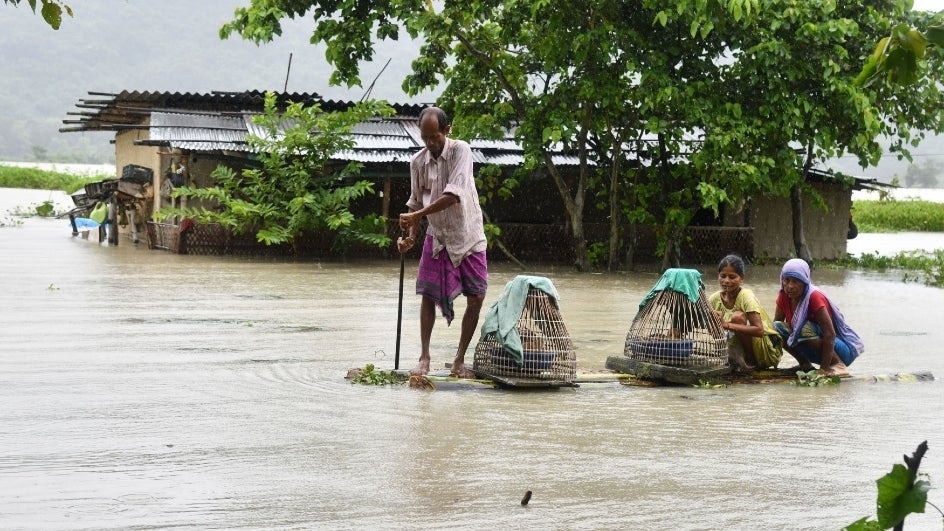 Authorities say that at the moment, 950 villages are under water and 30,333.36 hectares of crop areas have been damaged across Assam.

On Monday, the flood situation in Assam deteriorated severely. 2 people lost their lives. More than 3.63 lakh people are suffering in the floods across 17 districts, said an official bulletin.

The Assam State Disaster Management Authority (ASDMA) said that a child each drowned in the floodwaters in Barpeta district and another in Mayong, Morigaon.

The worst-hit district is Lakhimpur which has more than 1.3 lakh people suffering, followed by Majuli which has almost 65,000 people and lastly Darrang with more than 41,300 people being affected at the present moment.

44 relief camps are being by the authorities and distribution centres across 10 districts. Here, 1,619 people (including 321 children), are taking shelter. The bulletin also said that different relief agencies have evacuated 470 people from several parts of the state.

621.34 quintals of rice, salt and dal, 578 litres of mustard oil, 100 quintals of cattle feed and other flood relief necessities have been delivered so far by the authorities till now.

It also added that a total of 2,56,144 domestic animals and poultry have been affected in floods.
The Central Water Commission issued a report saying that the Brahmaputra is flowing in "above normal to severe flood situations" in districts of Dibrugarh, Jorhat, Sonitpur, Goalpara, Kamrup and Dhubri.