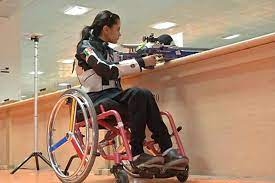 This 19-year-old has now also become the first Indian woman to win a gold medal at the Paralympics. Avani is the is the 4th Indian athlete to be winning a Paralympics gold after the swimmer Murlikant Petkar in 1972, the javelin thrower Devendra Jhajharia in 2004 and 2016, and the high jumper Thangavelu Mariyappan in 2016. Avani qualified for the final finishing 7th in the qualification round with a total score of 621.7.

In her 3rd and 4th attempts, she registered scores of 104.9, 104.8 to be in the game before scoring 104.1 which was in her final round of qualification. Avani is now to lock horns in the finals of the showpiece event.

Shooters are able to hold a gun with arms in the SH1 Rifle category. The athletes have an impairment in their legs. For example, they have paraplegia or amputations. Some athletes would be competing in a seated position and some will compete in a standing position.