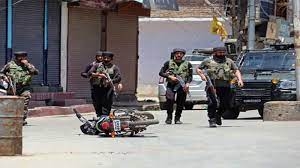 These terrorists had attacked a police party imposing Covid appropriate behaviour in Sopore on the 12th of June. The security forces launched procedures to identify & neutralise the terrorists after the incident took place.
3 terrorists which included a top commander of the terror group Lashkar-e-Taiba or LeT have been killed in an encounter in Jammu & Kashmir's Sopore. It started on Sunday night, said the police. The gun battle was caused from a joint operation which was launched by the army, Jammu and Kashmir Police and Central Reserve Police Force aka the CRPF.
The security forces have launched several operations in and around Sopore after a terror attack in the North Kashmir on the 12th of June. The attack happened when a police party which was being led by sub-inspector Mukesh Kumar was stationed at the main town for imposing Covid appropriate behaviour. Director General of Police Dilbag Singh said, 2 of the 4 policemen, identified as constables Waseem & Showkat succumbed the attack.
3 civilians which included those who had set up their roadside handcart have been injured owing to the incident. 2 of these civilians succumbed in the hospitals.
Lieutenant Governor Manoj Sinha said in a Tweet following the attack, "Strongly condemn the terror attack on civilians and security personnel at Sopore, Baramulla. My sincere condolences to the families who have lost their loved ones in this attack. Praying for the early recovery of the injured." He said the perpetrators of violence are the "enemies of humanity" and "such despicable and cowardly acts will not go unpunished".
Former chief minister and National Conference, vice-president Omar Abdullah said that such attacks must be condemned without any reluctance.