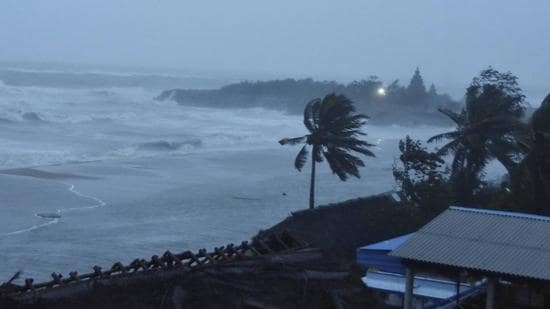 The IMD reported, Cyclone Tauktae is likely to intensify into a ‘very severe cyclonic storm’ & wind speed of 150 to 160 kmph by the 17th of May.

Cyclone Tauktae, which is currently centred over Lakshadweep, intensified into a cyclonic storm on 15th May, Saturday morning, according to a tweet by India Meteorological Department (IMD).

India’s western coast is bracing itself for the cyclone to make a landfall & the Indian Navy has assured the state administrations of their support. A tweet by a Navy spokesperson said that "Indian Navy ships, aircraft, helicopters, diving and disaster relief teams standby...for rendering full support to State administrations as Cyclonic Storm Tauktae approaches Western Coast of India.”

On Friday, the IMD forecasted the storm to be intensified in a ‘very severe cyclonic storm’ with wind speed of 150 - 160kmph by 17th May. The cyclone will likely move north north-eastwards initially for some more time. It will then proceed to move north north-westwards and reach the Gujarat coast by 18th of May in the morning, according to the weather department.

IMD said in a tweet "Deep Depression over Lakshadweep area and adjoining southeast & east-central Arabian Sea about 55 km north-northwest of Amini Divi to intensify into a Cyclonic Storm during next 12 hrs. To move north-north-westwards and reach near Gujarat coast by 18th May morning.”

A red alert has been sounded in 5 districts in Kerala -- Thiruvananthapuram, Kollam, Alappuzha, Pathanamitta & Ernakulam, and have positioned the National Disaster Response Force in affected areas of the state. Mumbai & Thane have also been put under the yellow category storm warning by IMD (effect of the storm is expected to be felt here too over the weekend).