Ancient Temple in Telangana gets a Rework 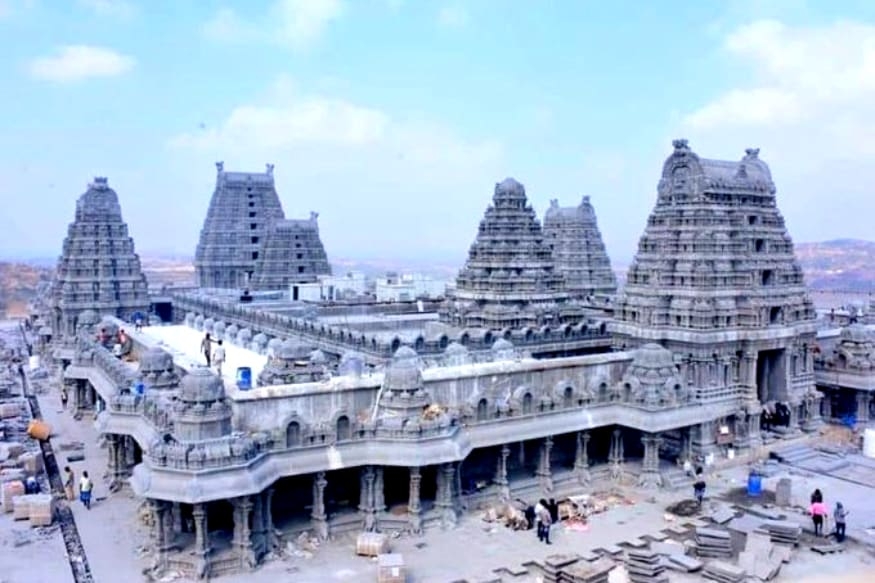 This centuries-old temple in Yadagirigutta – now renamed as Yadadri, was originally confined to just 2,500 square yards of area. Now this temple complex is spread over an area of 14.5 acres.
The ancient cave shrine of Lord Lakshmi Narasimha Swami on the hills of Yadagirigutta – around 70-km from Hyderabad is almost ready for inauguration with a complete makeover at cost of nearly ₹1,000 crore. 100s of sculptors, artisans are working late hours to give final touches to this magnificent to this ancient Vaishnavaite temple, which civil engineers & civic officials are racing against the time to complete the necessary civic infrastructure to provide all amenities for the pilgrims.

This 14.5-acre temple complex includes 7 temple domes, with a 100 foot main dome. G Kishan Rao, who is the vice-chairman and chief executive officer of Yadadri Temple Development Authority aka YTDA, said “All the works related to the main temple complex including architectural works like inner and outer prakarams (compound walls), various types of stone-carved pillars, affiliated temples, sculptures of various gods and goddesses and Alwars (Vaishnavaite preachers) have been completed.” He added - The cost of the Yadadri project is ₹1,800 crore. Till now, we have spent ₹837 crore for the project including constructing the retaining walls, developing the temple city in 250 acres, land acquisition cost & development of infrastructure, construction of VVIP cottages and increase of drinking water supply.

The construction which began in April 2016 is nearing its completion. The temple is being redeveloped according to ancient Agama Shastra - scriptures dealing with construction of temples & other Vedic scriptures.

According to the CEO of YTDA, “The uniqueness of the temple is that it is reconstructed without using cement, concrete or bricks, but only with Krishnashila (black granite) used by Kakatiya emperors of Telangana for the temple architecture. It can remain intact for another 10-11 centuries.”