More than 50 Farmers detained at Home, Not Permitted to Reach District Headquarters 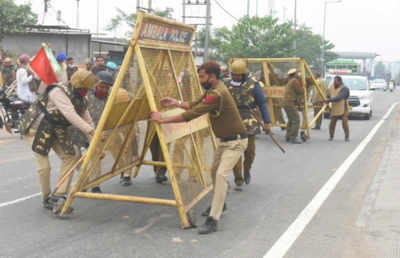 More than 50 Farmers detained at Home, Not Permitted to Reach District Headquarters
Agra – Farmers in the Agra area weren’t able to reach the district headquarters and also the sub-division offices that have marked the protests against the 3 farm laws. Hence, more than 50 farmers were detained at home by the police on Saturday. The district officials also went to some of the farmers leaders to collect their memorandum. Strict police deployment was made to on the major roads that connect the villages with the administrative offices.
District president of Bharatiya Kisan Union, Rajveer Lawaniy said, ‘Policeman had detained us at home early on Saturday. We refused to hand over our memorandum to them. Later, the police allowed us to move to the office of the superintendent of police (rural). There, we handed over a memorandum addressed to the President of India to the officials of the district administration and the police. We will continue our protest till the central government withdraws the 3 farm laws and guarantees MSP to the farmers.’

One of the Farmer Leaders Shyam Singh Chahar said, ‘Police detained me at home. Later, an additional city magistrate arrived and took our memorandum. Farmers in the Agra district held their protest in a peaceful manner. We have asked the district administration to take back legal notices being issued to farmers for instigating people against the 3 farm laws and participating in farmer’s protests. In case more notices are issued, we will be bound to take to streets.’

Inspector general of police A Satish Ganesh said, ‘There has not been a single incidence of disturbance of law and order in the entire Agra range. Farmer leaders were quite co-operative. They peacefully handed over memorandum highlighting their demands and concerns to the police and administrative officials. Policemen have been directed to be polite and respectful towards famers.’