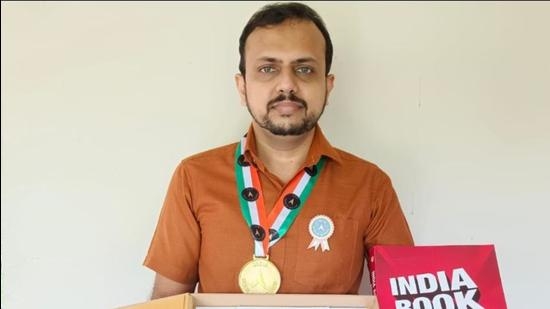 When the Covid-19 pandemic had created utter confusion, and instilled fear in the minds of people, NC Krishnaprasad, who is a clerk at the community health centre in Pazhambalacode has redefined his role, to guide them through these tough times. He chose facts to clear their doubts, and made good use of his data analytic skills he honed while he worked with a mutual fund firm.

When facts were hard to come by during the chaotic times, Krishnaprasad spent hours collecting all data available on the virus, organizing and turning it into useful pieces of information. Soon, he became the most sought-after person on anything and everything related to the pandemic. Right from people looking for testing or the vaccination centres, to the research students studying impact of the disease, everyone began looking forward to his updates, which were shared on a daily basis since April of last year. He also created several informative videos that bust the myths which are associated with Covid-19.

Krishnaprasad says he began sharing Covid-related information, like many others, after the infection broke out. But he stuck to his task as more people started finding it helpful. He started posting government bulletins in a concise form as his WhatsApp status from April 5 last year. When he stopped it for 2 days for personal reasons, people started asking him for information. That is when he realised that people are actually finding the information useful.

Since then, 41-year-old Krishnaprasad has not stopped with his updates. When the total number crossed the 12,700-mark, the Asia Book of Records approved of his efforts in posting Covid-related information on Facebook for the longest duration.

Those seeking information from him, all have different needs. During the peak of the first and the second waves, when havoc was wrecked in India, he scoured through bulletins of the governments of Maharashtra, Delhi, Goa, Tamil Nadu, Karnataka, Telangana, Andhra Pradesh and Gujarat to provide a clear picture of this situation. He says it was done to allay the concerns of the relatives of Malayali families in those states. They kept calling him to know about quarantine rules when people return to Kerala, and on getting Covid certificates.

He says that he gets calls from people asking for vaccination slots, testing centres, and on quarantine rules. He also became a kind of a counsellor when people contacted him after catching the infection, or when they think they could get infected because their neighbour got it. More recently, teachers and research students have started asking for data for their school projects and research works, respectively, he says.

He made his first video on social distancing when he saw people crowding in the market near his house. Since then, he has made as many as 85 videos on choosing the correct mask, and dealing with the infection, to busting myths on the vaccines.

When the grave situation of the pandemic started easing in India, he gradually began focusing more on vaccination. He recently shed light upon the developments related to Covid overseas. All of this effort has proved to be time-consuming, also affecting his reading time. But nevertheless, he is satisfied with the fact that all of it has been worthwhile. Krishnaprasad’s wife, Arsha Appekkat who is a school teacher by profession, also chips in whenever she can.