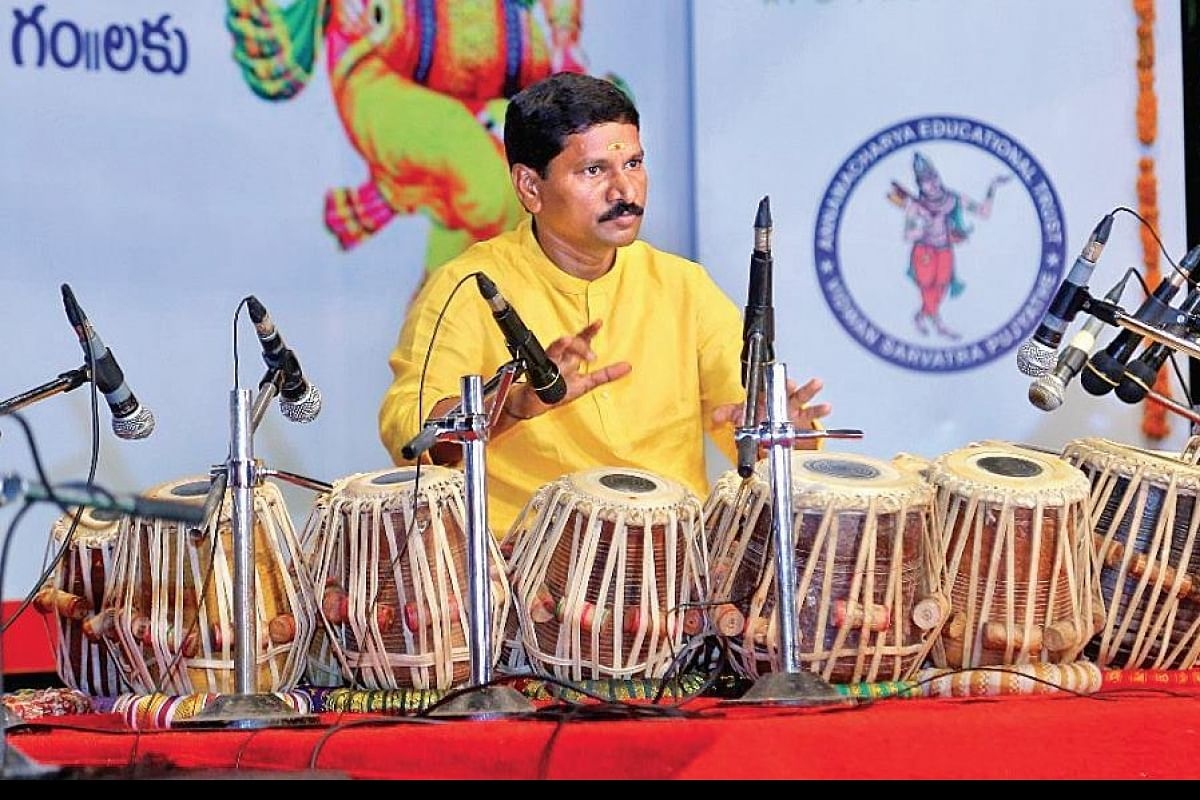 Even while living in the modern day and age, there still exist those families, who continue the tradition of making arts and crafts as their primary source of livelihood. One such family is that of Kondapalli Chidambara Nataraja. The family’s main source of income is music, and they have also been contributing towards the conservation of their culture and traditions, to pass it on to the next generations.

Chidambara Nataraja is a well-known Mridangam artiste, who comes from the famous Paravathi Nagar in Mydukur mandal in Kadapa district. This 45-YO is the son of Hamsa Awardee, Kondapalli Veerabhadraiah Bhagavatar. The artist went on to make a unique name for himself in Mridangam.

Videos of his unique performance while he plays 18 tablas at a time, have been sent for consideration into Guinness Book of World Records under the name Navaraga Tarangini. He performed the feat at a programme organised at the Ravindra Bharathi Auditorium in Hyderabad on November 17. He performed Sri Thyagaraja Kriti - Samaja Vara Gamana - in 9 different ragas.

Nataraja’s grandfather, Kondapalli Bikshapathi, also a well-known musician, earned his fame through playing harmonium. Nonetheless, it is Bikshapathi’s son Veerabhadraiah, who brought great fame to not just his family, but to the entire Kadapa. He performed on Radio, TV and was equally well-versed in Harikatha, Burrakatha and Yakshagana. He also excels in folk songs along with traditional music, which is extremely rare to come by these days.

Veerabhadraiah endorsed several government schemes for several years through Yakshagana, Burrakatha and folk songs. Parvathi Nagar in Mydukur came to be in 1988, as he aspired to bring all musicians / artists in one place, living in harmony. Donations helped a lot, and an auditorium of Rs 20 lakh was built in Parvathi Nagar. Soon, the village became an inspiration for many.

Following his father’s footsteps, Kondapalli Chidambara Raja decided to take up music as his career. He expressed his desire to be a Mridangam artist when he was 12, and his father encouraged him to begin the practise.

At 15, an Akashvani employee, Bhaskar Bhatla Krishmaurhty, became his teacher. In 1995, Gopavaram Ramachandran taught him to play percussion instrument at the Sharada Government Music College, Kurnool. It was here that he earned his diploma. From 2000 to 2002, he did his MA (Mridangam) at Potti Sriramulu Telugu University in Hyderabad, under Padma Shri Awardee, Dr Yella Venkateswara Rao. As of now, he is working as Mridangam artiste in Annamayya Project of Tirumala Tirupati Devasthanams. He also works as a Mridangam programme artiste at AIR, Kadapa.

Tabla is usually used in Hindustani classical music, but playing in 9 different ragas is an extremely difficult task, which Nataraj successfully achieved in November of this year.