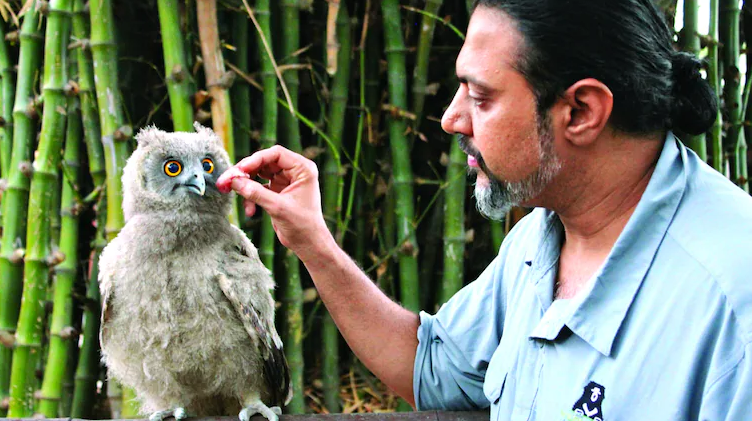 It once used to be a means of incredible joy, but few knew what the ‘dancing bear’ actually went through. Baby bears were forcibly taken from their mothers, a rope was put through their nose, pulling which would cause pain and force them to obey their owner’s commands. It took Kartick Satyanarayan and his team at Wildlife SOS an entirety of 2 decades to completely destroy this practice.

Kartick founded Wildlife SOS back in 1995 with Geeta Seshamani, who had a long association with the animal shelter Friendicoes - after seeing the plight of the bears. It currently runs many projects to support bear conservation in India, including the world’s biggest rehabilitation centre for sloth bears in Agra. The ‘dancing bear’ trade happened in the Kalandar community, says Kartick. The work was mostly out of compulsion and ignorance about laws or lack of opportunities. They didn’t have other means of living.

The approach of Wildlife SOS was to basically include the community to end the practice. When they began to crack down on bear poaching, they also worked with the community to improve their social status; helped them with woman empowerment, skill training, alternative employment and also sent over 7,600 children to school. Today, almost 40% of the staff at the Wildlife SOS are members of the community.

No Kalandar child born after 2009 has seen a bear in his or her home, and that can be counted as success enough for Wildlife SOS. The 4,000 Kalandar families do not depend on this illegal trade for sustenance anymore. The ‘Kalandar Rehabilitation Project’ has ended the tradition of 4 centuries.

Rehabilitating both man and the wild animals, Wildlife SOS has also taken the responsibility of providing a home to the bears that have rescued. Almost 1000 bears are now taken care of, at their centres located in Agra, Bengaluru, Madhya Pradesh and West Bengal.

Motivated by their success with bears, Kartick has expanded his conservation efforts to include other wild beasts too. The organisation now works along with elephants, leopards and reptiles. It now protects them from illegal poaching and provides them vital medical care. Each one of their 12 animal rescue centres in India gives Kartick immense happiness. He just has to sit, watch an elephant play in the water, a leopard peeking out of his den, a bear climbing a tree at the rescue centre, and he is at peace, knowing that he has brought these animals the dignity and freedom they rightfully deserve.

Looking after 1000s of rescued animals, or even protecting those living in the wild is by no means an easy thing to do. But Kartick firmly believes animals and people can live together in harmony. He says that in educating people on wildlife, including teaching them avoidance behaviour and how to cope with man-animal conflict, he believes that he’s building the bridge to coexistence and respect for our nature.