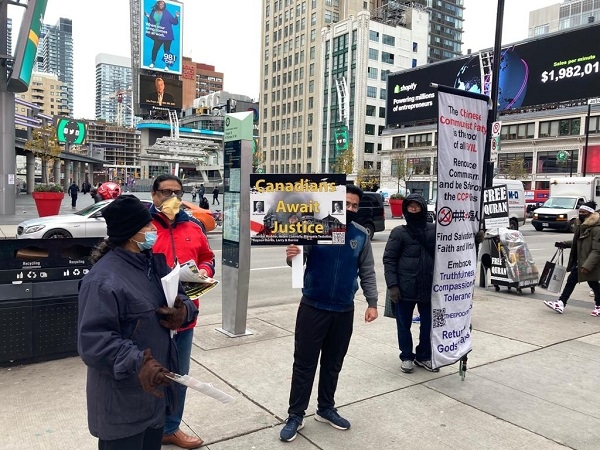 The Hindu Forum Canada, on Friday, observed Remembrance Day at Dundas Square, Toronto to honour victims of 26/11 Mumbai terror attacks. On November 26, 2008, in Mumbai, terrorists succeeded in killing 170 people, including 26 nationals from 15 countries around the globe, and severely injuring 304 more.

2 Canadian citizens were among these people who lost lives in the attack. 6 more were injured in the attacks. Dr Mike Stewart Moss and his partner Elizabeth Russel were shot dead by terrorists. Montreal based actor / director Michael Rudder suffered 3 gunshot wounds. Helen Connolly, a Yoga instructor from Ontario, sustained a bullet injury and Raynor Burke from Toronto was able to save his life.

Other Canadians were caught up at locations of attacks, including Manuela Testolini - ex-wife of pop star Prince and middle-aged Canadian couple Larry & Bernie, who barricaded themselves in their hotel room to escape terrorists.

The members of Hindu Forum Canada urged the Canadian Government to declare November 26 as the Day of Remembrance for victims of the Mumbai terrorist attack. The organization urged the Canadian Government to ask Pakistan to prosecute all conspirators so that the families can finally experience a sense of closure. Even after the passage of 13 years, the horror of terror remains fresh for those who were affected by the attack.