Meet the all-rounder wrestler from Andhra-Pradesh!

Playing sports is one of the best ways to keep your body physically fit, says Chalamala Renuka - who is an engineering student hailing from Kadapa and is also emerging as a wrestling talent at the State level. 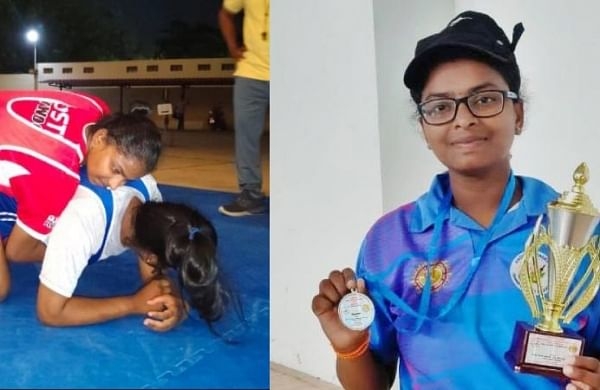 She says, “I chose wrestling as it is one of the exciting sports and several women wrestlers won Olympic medals for the country. Most importantly, it helps keep one physically fit, mentally sharp and be self-confident.”

Renuka actually started learning wrestling from the coach Ganesh from March of last year, after her college (which was KSRM Engineering College), invited him to conduct a self-defence coaching session for all the students there. Now, she is not just doing well in her wrestling, which is her forte, but is also exceling in many other sports like tennis, cricket, karate.

She has won several medals at the competitions held there. Renuka has won a silver medal at the AP South Zone Tennis Cricket tournament held from September 25 to 27 at Pulivendula.

Apart from sports, Renuka also has some outstanding skills in drawing and dancing. According to her, extra-curricular activities are as important as studies for the overall development of a student.

In fact, Renuka had secured a complete 10 out of 10 grade points in her 10th class, and in intermediate secured 8.7 points. Hence, she secured a seat in the KSRM Engineering college, where she is currently pursuing B Tech CSE, third-year. Giving the credits of her learning wrestling to college’s women cell in charge Radha, she says that she always motivates the female students to be more proactive and self-confident.

Renuka’s wrestling coach - Ganesh, who is all about praising her for her dedicated efforts, said 10 girls and 15 boys are learning grappling from him. He said, “As wrestling demands a fit body for attack and defence, one invariably stands to benefit from a good physically fit body, quick reflexes and focused approach. It also helps one in self-defence.”

This was about Chalamala Renuka, and her amazing unique achievements she has secured at such a young age. Comment down below your thoughts on her attainments. Also do tell us if you know of any more such young all-rounder achievers. Do visit the space for more such stories!
Chalamala Renuka