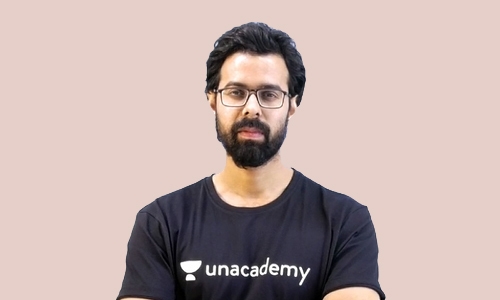 In India, almost 18 million children live on the streets. A lot have had no kind of formal education or they dropped out in early years of schooling owing to poverty. Instead, they are forced to beg on streets for a living.

In 2015, Bhunesh Sharma, an ed-tech entrepreneur hailing from Jaipur, came across a few such children at a traffic signal. They approached him at the car window, asking for pencil and paper. The request surprised him, as these kids were there to sell items / ask for money. Instead, they wanted to meet their primary need for education.

Bhunesh says that he immediately rushed to a nearby stationery shop and bought pencils for them. They were 3 kids, 2 of whom were boys aged 4 and 8 years. The other was a 3-year-old girl living in a slum nearby. He reached out to their parents to understand their conditions and whether they were attending school.

He learned that the children needed educational support, so he offered to teach them for free. But Bhunesh was just a stranger who had randomly showed up at their doorstep, offering teaching their kids - so the parents refused. They suspected he would push them illegal activities

He did not give up and tried to convince them over the next week, until they finally agreed. They were reluctant to send their children to study outside their locality. Hence, he told the parents that he would make daily visits and teach the children at home, where the parents could see them in session.

He was working for a start-up then, and could barely spare an hour to teach daily. Seeing his sincere efforts, 7 parents approached him to ask if he would teach their children. As classes continued, number of students grew to 40 by 2017.

Bhunesh soon realised that children would flourish more if they attended school. Many had dropped out. The parents could not seek admission in private schools under Right to Educate (RTE) due to lack of documents. The parents were unaware of how to follow procedures. So, Bhunesh loaned Rs 1.5 lakh to admit them into private schools and pay their tuition fees.

Number of children in his classes kept increasing, so Bhunesh started roping in volunteers. His wife Neha also joined the cause. But when the numbers crossed 125, they realised that personal finances were not enough to support the children.

In 2019, Bhunesh launched Smile for All Society or SFA - an NGO to seek monetary aid. 2 years later, in 2021, he started an OTT-like subscription model to attract donors to sponsor education for underprivileged children.

The subscription model works like any system such as Netflix, Amazon, Hotstar. People wanting to sponsor education for children can sign up for a monthly payment starting with Rs. 500. The amount paid is directly spent on the children’s education.

1 volunteer is dedicated to every 5 students, monitoring, sharing information. There are 4,000 volunteers investing time to teach children from 100 slums across India like Kolkata, Jaipur, Mumbai and Noida.

Supriya Srivastava, from Noida, volunteering with the NGO, says, “I came across the NGO through mutual friends, and decided to volunteer to help the kids. The children in the slums are intelligent, but lack resources. Hence, I decided to give my weekends to teach the children.”

Till now, the NGO has received 612 subscribers sponsoring education of over 1,000 children across 250 cities in India. There are 35 schools on board, including remote tribal areas of Jharkhand, Odisha.

Bhunesh says that the NGO also helps in fulfilling document requirements and providing study material to children. “My dream is to see every child from a slum access education. I believe that education can help bring a better life for everyone as it opens multiple opportunities,” he adds.