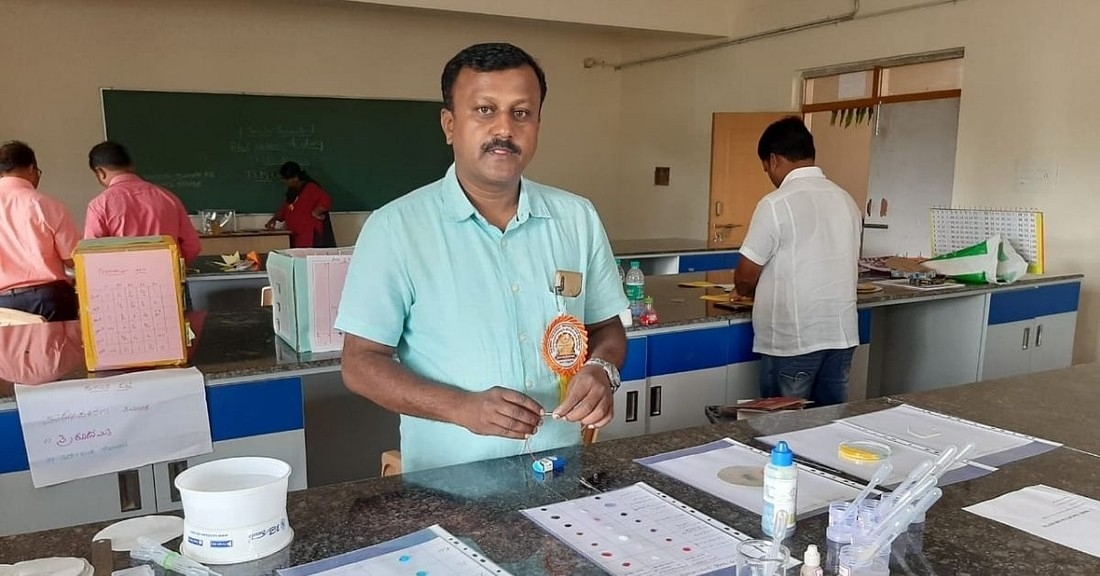 C M Nagaraja, is a school teacher from Bengaluru, and even though he teaches science to students of Class 8, 9 and 10, he has gone well beyond his call of duty to inculcate some very healthy lifestyle changes through his teachings and lessons.

For doing this, he was also felicitated with the National Awards for Teachers / NAT on Teacher’s Day, September 5, 2021. Nagaraja was awarded for introducing the eco-conscious initiatives to throw light on the magnitude of global warming and climate crisis.

Sustainable hacks of his that has left us impressed: He has always led an eco-friendly lifestyle, and hence, introducing such practices to others was not as challenging as getting funds to execute them. Nagaraja joined this school in 2018. Initially, his ideas were met with enthusiasm but due to the lack of funds, his project was delayed. So, he did the next best thing – he approached NGOs there in the city.

Simultaneously, he worked on kick starting a waste management programme. He repurposed the old and broken metal-based furniture, including chairs and tables, and converted around 20 broken pieces into newspaper reading stands, a projector screen, dias, podium, name plates and cupboards for the teaching staff.

Discarded milk pouches were another eyesore. Nagaraja says, “We serve milk to our students as part of the mid-day meals scheme. But the 1-2 litre pouches are carelessly thrown in the compound. I gathered 2-3 parents of our students who are tailors and came up with a plan.”

After some weeks, 20 computer systems in school were adorned with new and stylish covers that were made by upcycling these discarded milk pouches. Seeing such initiatives, 5 NGOs came on board to carry forward Nagaraja’s efforts.

The first thing he did was purchase 2 bio-waste converters and bins for the paper and plastic waste.

He adds, “One converter is for biowaste like leaves and agri-waste that we collect from nearby farms and the other is for food waste generated in the school’s kitchen. In six to eight months, we generated 1 tonne of manure that was used in our one-acre garden. Meanwhile, 58 kilos of plastic and paper waste collected in a year was given to the local recycler.”

The school has 5 underground water recharging pits to store rainwater and wastewater that is reused for non-potable purposes. The school uses 1,500 litres of water daily, to wash utensils and to water the plants. The wastewater is transported to one of the pits that’s connected to a tank.

He says, “After recharging the pits, the leftover water is percolated into the tank with a capacity of 4,500 litres. It is filled with stones which obstruct the solid waste and purifies the water. We have connected a pump to the tank from where we collect the water every three to four days. It is a well-rounded cycle.” With the student’s help, Nagaraja installed sprinkles for drip irrigation in order to save more water.

Nagaraja has also prepared a chemistry kit for his students with discarded bottles. He made mini portable kits, which students use to do chemical experiments at home.

Government schools generally don’t have reputable images, but in past few years, we are seeing a shift, owing to teachers like Nagaraja, who work hard to elevate minds, ignite creativity and encourage unique thinking amongst pupils.