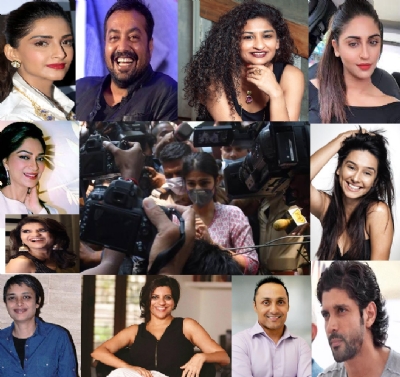 As the case of actor Sushant Singh Rajput’s death gets more and more tangled, B-town celebs are getting more creative in their efforts for “#JusticeforRhea”. In another attempt for their “justice seeking” rendezvous Shibani Dandekar, Sonam Kapoor, Anurag Kashyap, Zoya Akhtar, Farhan Akhtar and many more have written an open letter to the news media of this country.

We, are worried about you. Are you feeling ok?

Because, as we watch your witch-hunt of Rhea Chakraborty, we cannot understand why you have abandoned every professional ethic of journalism, every tenet of human decency and dignity and chosen instead to physically assault a young woman with your camera crews, endlessly violate her privacy and work overtime on false accusations and moralistic innuendo for a drama of ‘Rhea ko phasao’.

You have been obsessed with creating only one narrative: a young woman who makes her own decisions, who lives with her boyfriend without marriage and who speaks up for herself instead of acting like a damsel in distress, has a morally dubious character, and is to be considered a criminal at any cost, without investigation, without the process of law and respect for her rights.

We know you can be different — because we have seen you be kind and respectful to the Salman Khans and Sanjay Dutts of this world, urging us to think of their families, fans and careers. But, when it comes to a young woman who has not even been proven to commit any crime, you have assassinated her character, egged an online mob on demonize her and her family, fueled wrongful demands and called her arrest your victory. Victory over what? Young women daring to make their own lives in a society that grudges them their freedoms?

There is so much in this world that prevents young women from even dreaming little dreams, let alone achieving them. Their laughs are too loud for everyone, their freedom too free for families and communities — and apparently for television news channels — their sadness not real, their questions, their concerns, their ambitions, their clothes choices, all scrutinized, trivialized, dismissed, persecuted. It is easy to victimize a young woman because there are so many people who already disbelieve, slut-shame and abuse women, for their smallest freedoms. It is certainly cheaper than doing actual stories about a host of issues from GDP to health, currently confronting us.

In a pandemic which has seen a disturbing rise in domestic violence, in a society where women don’t report sexual violence to the police, because they are likely to be told they were somehow ‘asking for it’ — ‘it’ being assault, rape, harassment — is promoting damaging stereotypes of vishkanyas and dayans, which have endangered women for decades, the best role you found to play?

In a pandemic which has seen India’s already alarming mental health crisis intensify, and suicide rates go up, you could have taken the chance to make a difference to the understanding of mental health, bringing compassion and information to the table.

Instead you chose to trivialize depression and perpetuate the most regressive stereotypes about mental health. Why? Just because Rhea Chakraborty took her boyfriend’s mental health seriously? Why don’t you want to look at it seriously? Why do you not want to acknowledge that India accounts for one third of female suicides in the world — and that family violence and social ostracism is a major reason for their suicide attempts? What are you hiding, news media, who are you protecting when you don’t confront these real truths of our society? Is it the callousness inside our ‘simple’ families and the cruelty of our society to anyone who is different, which you have enacted yourself in your character assassination of a young woman? We see which side you are on — it is not the side of a neutral viewpoint, not the side of fairness and justice, but the side of social violence and control.

Your pulp fictions have threatened both, the vulnerabilities of women and the fragility of mental health. And you have sent out a message to every woman in this country– and to their potential attackers — that if she does not stay within the most restrictive limits she is fair game for abuse, molestation and violence.

Spare us your tired hypocrisies of Beti Bachao and respecting women. It is not being someone’s beti that makes a women worthy of respect. It is being an equal citizen of the country that accords us the rights all citizens deserve: due process in law, protection from violence, a fair listening ear, respect for choice and privacy.

We write to ask you, the news media, to stop this unfair witch hunt of Rhea Chakraborty and to stop fueling moral polarities of good women to be deified and bad women to be crucified which endangers all women.

We write to ask you to do the right and responsible thing. Your jobs. Hunt news, not women.

This letter has been signed by 60 organizations like – Satyashodhak Feminist Collective, Democratic Teachers’ Front, LABIA, Dalit women collective etc. Along with them it has also been signed by over 2500 individuals, many of them b-town celebs.