Have you seen Jawaani Jaaneman Trailer ?

The trailer of the Jawaani Jaaneman which stars Sif Ali Khan marks the debut of Alaia F and has a special appearance by Tabu was recently released. From the trailer, viewers could make out one thing for sure, the film will leave everyone laughing. Jawaani Jaaneman is not a regular cliché chick-flick. Instead, it brings out the essence of father-daughter bonding in a very light-hearted and comic way. Saif Ali Khan is seen in a very quirky and funky avatar, quite different from his previous roles in Sacred Games and Laal Kaptaan which were pretty intense. 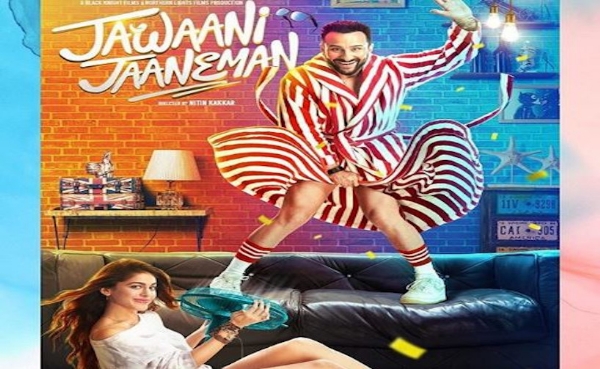 Pooja Bedi’s daughter Alaia, looks extremely fresh and all set to enchant the audience. The film also has an appearance by Kubra Sait. Tabu and Saif will be seen together on-screen after a long time. The film is directed by Nitin Kakkar and is geared up for its release on 31st January. The trailer shows Saif as an adventurous playboy who is in for a shock when he finds out that he has a daughter and that she is pregnant. Alaia plays his daughter and Tabu plays her “hippie” mother.

The whole film revolves around the complicated relationship of the father-daughter duo and how they still manage to come around and bond. The trailer truly looks promising although the posters did look a bit gaudy and tacky. The audience sure is excited to see Saif in this character.
Jawani Janeman Tabu Aalia bedi Saif ali khan news trailer